Halloween originated in Ireland and was brought to North America by Irish immigrants in the 19th century, so it's just been over a hundred years that we Americans have been celebrating it. The most common activity is "trick-or-treating". This is mainly for children up to age of about 12. They dress up in costumes and go house to house asking for treats with the question "Trick or treat?" If no treat is given, the homeowner may have a trick played on them or their property. When I was a kid (or early teen), the most common trick was to TP (toilet paper) their house. This is when you get some rolls of toilet paper and throw them up in their front yard, decorating their trees in a lovely shade of white or pink. :) This usually happens in the cover of darkness. Anyway, I used to love going trick or treating and bringing home a huge bag of candy, one of my favorite foods. haha! Nowadays I still enjoy going to a costume party. Here in Japan, Halloween has been getting bigger and bigger every year since the first time I came here in 1990. In almost every city a costume party can be found. They are usually attended by a mixed crowd of "gaijin" and Japanese. You can see some photos of a few of the parties I've attended here and a couple of me on Halloween day when I was in elementary school back in CA. 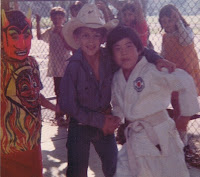 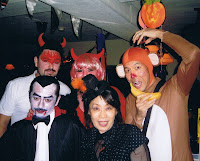