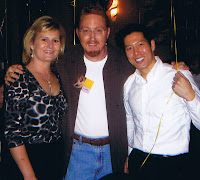 I can't believe it's been 25 years since I've graduated from Tokay High School in Lodi, CA. Reconnecting with my old high school friends was definitely worth the 10,000 mile (16,000 Kms) round-trip between Tokyo and San Francisco. I haven't really seen nor kept in touch with most of these friends since high school. But recently, thanks to Facebook, I've been back in touch. In fact, the whole event was organized through Facebook. I have to admit, I was feeling a little nervous going back and seeing my old pals that I hadn't seen in such a long time. It really helped that Sean (AKA Rusty) hosted poker at his house the night before and I could hangout with some of the boys. One of the highlights was seeing some of the old Morada gang (friends from my neighborhood). We went to school together from elementary through high school. They all looked great. And my first girlfriend (when I was 10) was informally voted "Ms. Reunion Queen", haha.

It was interesting to see how the football studs and the cheerleaders/drill team dancers were still the life of the party (the water polo guys fared pretty well too, hehe). The nice thing was that we all weren't as "clickish" as we were back in high school. People mingled about freely and everyone seemed to be happy and content as we enter midlife. It was also great to hear how successful many of our classmates are: New York Life Insurance Co. pres., pilot, fire fighter, teacher, UPS driver, etc. The biggest surprise was a former teammate on my JV basketball team becoming a doctor, JK Carlos! :) Maybe the most successful was Rick Sayre. He became Pixar Animation Studio's Supervising Technical Director. Even back at Davis Elementary School we knew he was way smart and would become a famous scientist (or animation director).

My claim to fame back in high school was to have played on the most different sports teams (basketball, football, soccer, swimming & water polo). Too bad I'm the only one who knows about this! haha The good thing about playing many different sports was that I got to be friends with guys from various sports teams. Those are the guys who made my high school days so much fun.

One difference between high school reunions in Japan and the US is that in the US, our reunions are held every 5 (or 10) years after graduating. They also include the entire class that graduated that year. There were nearly 500 students who graduated from my high school as the "Class of 1984". Japanese high schools are generally much smaller (one reason is that there are only 3 grades, 10th-12th). In contrast, I've heard many of my students in Japan talk about their junior high (or even elementary school) reunions. These usually just include their homeroom class. Husbands/wives also never attend the reunions with their spouses in Japan. This also holds true for company parties too. My wife didn't make it to my 25-year reunion but maybe she will to the next. Come to think of it, she'd probably be bored stiff so we'll see. Either way, I look forward to the next one which some people are already planning! :)
posted by conrad 4 comments: