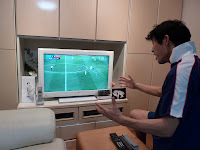 It's June 29th. Japan has made it to the 2nd round knockout stage for the first time ever on foreign soil. Kickoff is just 90 minutes away (Japan time @ 11pm). I've got my Japan jersey on and will be cheering for the "Samurai Blue". I predict them to win Paraguay 2-1 and then get whipped by Spain in the quarterfinals. My other (not so bold) prediction is that Brazil will win in the finals over Argentina. Anyway, why am I writing about the World Cup?! Most Americans couldn't care less about soccer and after team USA was booted by Ghana, those few who were tuning in have probably lost their interest. The fact that I'm living in Japan and Japan is still playing (well at least one more game) has kept me interested. However, I would still at least be reading about the games and watching them when I could.

How did I get interested in the World Cup? I was living in Niigata pref. in 2002 and Niigata was chosen as one of Japan's host cities. I was able to experience real WC excitement as fans from all over the world gathered in what is usually quite an ordinary (if not boring) city. There were huge parties going on, fans dancing and drinking in the streets. It was all good vibes from soccer fans celebrating. I'm hopeful that I can someday watch a WC game live, preferably with the US or Japan teams playing.

Many of my friends here in Japan ask me about the popularity of soccer in America. I answer that's it probably around #10 in terms of people attending a game or watching it on TV. But in terms of people playing it, many are surprised to learn that it is the most popular sport for both boys and girls. I played it for a couple of years in elementary school. In fact, our neighborhood (Morada) gang had a decent team with almost all of us going on to play in high school too. As a freshman, I played (American) football. When I decided to make the switch over to soccer (both sports are played during the fall) my sophomore (2nd) year, one friend (JB) teased me for not playing the "man's" sport. This is precisely the reason that most boys when they become teenagers switch from soccer to another sport (or at least it was back then).

I do have a couple of complaints about soccer. The first and biggest is that the players should cut out the theatrics. How many times a game do you see a guy go down and stay down and roll around on the pitch and scream and cry like a baby?! That is the most disturbing thing for me to watch. Play the game! Quit acting and Quit crying!!! OK, enough on that rant. My other complaint is not so big. But how can a sport that is played for 90 minutes (sometimes 2 full hours) end with the score 0-0?! Is that exciting? Can that be considered a show of athleticism on both sides? I find it hard to answer yes to either question.

I'll end with my soccer predictions. The next world cup in Brazil will see Japan making it to the 2nd round again but that's it. However, team USA will make it to the semi-finals. And in my lifetime, I'll bet that team USA will win the WC for the first time (maybe 20 years later). I kind of like how the USA is now the underdog when it comes to soccer. It really can't be said about too many sports the USA participates in. That is one of the beauties of soccer, how a country with only a few million people or a very poor country can play and often outplay the larger and richer countries. So let me say, "Go Ghana!"
posted by conrad 6 comments: