What is The Happiest Place on Earth?

Maybe Disneyland isn't "The Happiest Place on Earth" as it markets itself to be. However, it makes millions of people happy each year. The Magic Kingdom in Orlando is the most popular followed by Disneyland Park in Anaheim with Tokyo Disneyland a close 3rd with over 13 million visitors each year. Tokyo Disneyland (opened 1983) and DisneySea (opened 2001) are the only Disney parks not owned by Walt Disney Co.

Growing up in California (home of the first Disneyland which opened in 1955), my family would drive down south (about 6 hours) to Orange County for a summer holiday which always included Disneyland (and Knott's Berry Farm). I can even remember using tickets for the rides back then.  http://en.wikipedia.org/wiki/File:DisneyTicketBook_wbelf.jpg  This stopped in 1982.

Anyway, I have many fond memories of going to Disneyland as a child and as an adult.  No one likes queueing in long lines or paying exorbitant prices for food/souvenirs, but I do think it's worth it, at least once every year or two.

Here are some pics. when we went with Aki's brother and his family.  We got to see Captain EO starring Michael Jackson.  The last time I saw it was in the late 80's.  Bottom pic. is Taiga with his favorite character, Lightning McQueen of Cars.  We (he) can't wait to go to Cars Land the next time we visit home (summer of 2013)!  :) 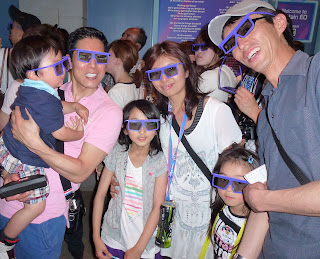 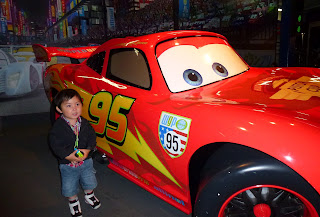