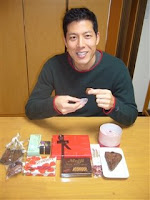 The Japanese adopted Valentine's Day from the West in 1936. This bright idea came from a chocolate maker called Morozoff and now about 20% of Japan's annual chocolate sales is during Valentine's Day week. The interesting thing about it is that almost ALL the chocolate buying is by women! I felt out of place when I went into the Plaza (formerly Sony Plaza) to get my wife a card and some chocolates and was the only man out of about 100 female customers. Of course I didn't mind though, haha. So Valentine's Day in Japan is when a woman can show her affection to the man she is interested in by giving him chocolate. It's almost the exact opposite of how it's done back in America. While men and women do exchange gifts, it is definitely much more the man's responsibility as he usually spends twice as much as the woman does. Sending a dozen red roses to her place of work is always a winner. It's also common to give flowers/chocolate to your mother too. A forgotten Valentine's Day by a man can cause his girlfriend/wife to be very upset/hurt. Isn't it nice for us guys to be in Japan?! JK.

I remember my first Valentine's Day in Japan.

I had no idea about the custom of girls giving to guys. I think I received about 50 gifts, including chocolates and hand-made cookies or cakes. Oh, I forgot to mention one thing. There is something called "giri choco". "Giri" means obligatory in English and this is the chocolate that is given to co-workers or superiors (or in my case their teacher) out of a sense of obligation. Anyway, as I'm now an old married guy, last year I only got 5 chocolates and they were all "giri choco". :)

There is one more custom that is unique to Japan (and Korea). This is called "White Day". This was also dreamt up by a Japanese department store eager to boost their sales.
"White Day" is exactly one month later on March 14. On this day, men must reciprocate all the gifts they received AND their gifts should be of MORE value! Giving white chocolates is very common and a friend told me that marshmallows can be given to a girl who is just a friend. Men also can give jewerly or lingerie if they really like the girl (or really hope the girl will like him), hehe.

When I was in elementary school, we used to decorate the classroom with hearts and cupids and exchange cards and candies. I loved this day because I could say "I like you" in a card and hopefully be written the same thing back. I can still remember the girl I had a crush on in the 4th grade; her name was Cindy C. I did become her boyfriend in the 6th grade but that was short-lived as she dumped me for one of my friends. That's OK, she's still my friend. :)
posted by conrad 3 comments: