The hardest thing I've ever done in Japan

No, it isn't mastering kanji! I wish I could say so but after 10 years in Japan my kanji compares to that of a kindergartener. Some may say it's climbing Mt. Fuji. Well, that wasn't so hard but I can't honestly say I have since I didn't make it to the summit. A terrible wind started blowing and our guide decided to turn back. Very disappointing for me since we were three quarters the way up the mountain. And no, it's not eating natto (sticky & stinky fermented soy beans). This was also very tough for me but about a year ago (after my wife's persistence), I began to take a liking to it; it definitely is an acquired taste. So what is the hardest thing I've done in Japan? Without a doubt, it was getting my Japanese driver's license! This undertaking began this past summer in July and was attained just last week. In total I went to the driving license center (DMV) about 10 times. Each trip was a 90-minute train ride each way and an average waiting time of 3-4 hours. So much for Japanese efficiency on this one (wink wink). On one occasion, after arriving early, I couldn't even be seen. The window is only open for 2 hours in morning and 2 hours in afternoon and sometimes they can't see all the people because a lack of staff. Another time my paperwork was inefficient. And OK, I didn't pass the written test the first time (nor the 2nd!). But that wasn't my fault either (LOL). Do you know how many meters away from a driveway you must be parked? And oh yeah, it did take me a couple (3) times to pass the driving test too (at $50 a pop). But I didn't know it would be an automatic FAIL just for hitting a curb, hehe. I think anyone who has driven with me would say that I'm a pretty good and safe driver (all right, just a safe driver). Well, I was told I was driving too fast on their little track. We don't even go on the real road for the test. But I thought that was a bit ironic since friends back home often comment about my "granny" driving habits. :) Anyway, I have finally got my Japanese driver's license and what a relief it is. So why did I go through all this trouble? Aki was getting tired of being the ONLY driver. I actually promised I'd get it last year but better late than never, right?! 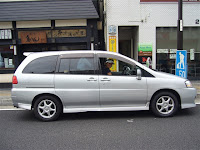 So here's a pic. of our new (used) car. It's a 2000 Nissan Liberty. At one million yen (just under $10,000), it's the most expensive car I've ever bought. Yeah, I was never really into cars much. My all-time favorite car would have to be my Mazda Miata (Eunos Roadster) 1995-1999. I had always wanted a convertible (open car) and no better place than CA for that. BTW, our new car has 2 sun roofs and a navi (navigation system). This was more than 10% of the total car price! But this is also something that I promised Aki we'd get since we almost always fought on our long road-trips because I couldn't read the maps properly - they were all in Japanese (was always my excuse)! :) 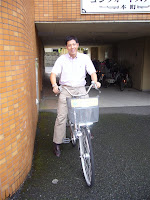 I'm perfectly fine just riding my bicycle (pic.) which coincidentally I also just bought a couple of months ago. This classic beauty only cost a couple hundred bucks. But according to my wife is very lacking in the aesthetics department. OK, safe driving everyone!