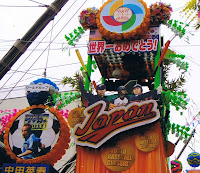 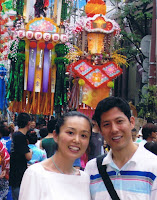 July 7 is "Tanabata" festival in Japan. In English, it is also known as the "Star" festival; it originated more than 2000 years ago from an old Chinese legend in which two lovers were separated on the opposite sides of the Milky Way by their king. They were only allowed to meet once a year on the 7th day of the 7th month in the lunar calendar. They can't see each other if the day is rainy, so people pray for good weather and also make wishes for themselves. They write their wishes on strips of paper and hang them on bamboo branches.

Many cities display long colorful streamers on the streets. The two biggest "Tanabata" festivals in Japan are held in Hiratsuka (just 20 minutes from Odawara) and Sendai (up in Tohoku). These festivals attract millions of visitors each year. Here are a few pics. from both festivals.
posted by conrad 3 comments: