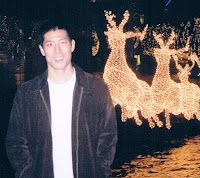 Merry x-mas everyone! This is definitely my favorite holiday of the year. As a child, I can remember counting the presents and counting the days before I could open all of them. My parents spoiled my brothers and me. I think we got over 10 presents each! Probably the best present I received was a blue Schwinn http://www.schwinn-jpn.com/05bikes/stingray_his.htm bicycle with the raised handle bars and big banana seat when I was about 9 years old. 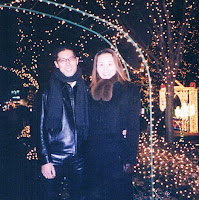 Like shogatsu (New Year's) in Japan, x-mas in America is a time for family. My family always went to my Uncle John and Aunt Kinu's house. My grandparents, cousins, their boyfriends and girlfriends, my brothers and me and our girlfriends would all be there. Of course we would have the traditional x-mas dinner of roast turkey but there would also be an Asian flavor. My grandma always made inari sushi and maze gohan. My aunt would make her famous fried wonton and Chinese chicken salad. There would also always be lots of California-grown white rice to go with the turkey, ham, steak, chicken and sashimi. BTW, guess what the most popular dish is in Japan on x-mas eve??? It's a bucket of KFC (Kentucky Fried Chicken)!!!

Yes, Christmas here in Japan is different. It's not a holiday and it's hard to feel the x-mas spirit. Christmas Eve is not a time for families to be together but a time for couples to go out. It's much like Valentine's Day in the states. Surpisingly, Christmas was not a holiday in early America either. From 1659 to 1681, the celebration 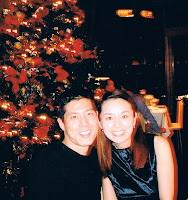 of Christmas was actually outlawed in Boston. And Congress was even in session on December 25, 1789, the first Christmas under America’s new constitution. Christmas wasn't declared a federal holiday until 1870.

In the 17th century, Dutch immigrants brought the practice of gift-giving at Christmas to America. They also gave us the legend of Sinter Klaas; Sinter Klaas is the Dutch name for St. Nicolas and this is how we got Santa Claus. Santa Claus was born in the US in the 1860's. Americans gave Santa Claus a white beard, dressed him in a red suit and made him a cheery old man with red cheeks and a twinkle in his eye. But do you know where Santa Claus is from originally? Most people are surprised when they learn that he was a real person from the warm climate of Southern Turkey. The legend of Santa Claus can be traced back hundreds of years to a monk named St. Nicholas. It is believed that Nicholas was born sometime around 280A.D. It is said that he gave away all his inherited wealth and traveled the countryside helping the poor and sick. Christmas is a time for giving, sharing and peace.

Happy Holidays to you all!
posted by conrad 1 comment: