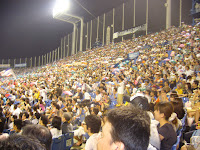 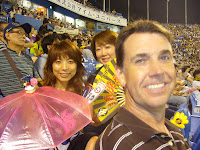 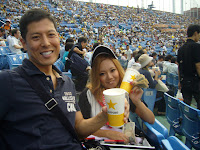 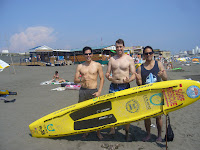 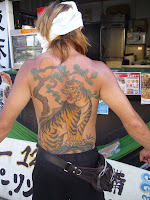 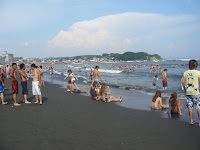 What's more summer than the Beach and Baseball? I've always loved the beach. Coming from California, many people (from Japan) imagine that I live near one. Unfortunately, my hometown is about an 80-minute drive away. As a kid, our family would drive to Santa Cruz every summer. I also chose my university, Long Beach State University, because of its location. This is where I learned to surf (well kind of) in a P.E. class. The beaches in Japan aren't bad, but there are a couple of things that make them less desirable than the ones in CA. The worst part is that they are so crowded. Hard to play football or even frisbee on the beach. Japan is known to be a clean country but ironically the beaches can be dirty. Trash can be seen on the beaches and in the water. One reason is that trash cans are few or none. This situation has improved over the years because of volunteer groups doing beach clean-ups and a greater awareness of keeping our beaches clean. Anyway, I love just chillaxing on the beach. Looking at and listening to the waves gives me power.

Baseball is said to be America's sport, but it doesn't make my top 10 list. This is probably due to the fact that I was a terrible baseball player. I played a couple of years of Little League. My position was right field (where they put the worst fielder) and I was the strike-out king! I never watch baseball on TV but I enjoy watching almost any sport "live". This summer I was able to go to my first Japanese professional baseball game. This was a very interesting experience. Each team has a fan club and they sit in an "official cheering section". If a home game, they sit in the right field bleachers. At away games, they sit in the left field bleachers. They play songs (#1 is "Popeye the Sailor Man"), beat drums, blow trumpets, wave flags and do all sorts of monotonous collective cheering. We saw the Yakult Swallows play the Hanshin Tigers. After a run is scored, Yakult fans open their umbrellas (they bring or buy small ones) and you can see a sea of umbrellas dancing. Baseball came to Japan in 1873. Although the level is not as high as MLB, there are a few players on each team that could easily start on a MLB roster. Games are allowed to finish in a tie. Some of the ballparks are small compared to those in MLB. Another big difference is that Japanese pro teams are named after the companies that own them and not the city that they play in. The Yakult Swallows play at Jingu Stadium in Tokyo. Yakult Corporation makes a milk-like drink. The Hanshin Tigers are owned by Hanshin Electric Railway Co. They play at the famed Hanshin Koshien Stadium, the oldest ballpark in Japan built in 1924. This is where the high school baseball championships are held each August for 2 weeks. For these 2 weeks, Japanese professional baseball takes the backseat as more people tune in to watch the high school boys play their hearts out. My one complaint is that I hate to watch a bunch of boys (or anyone for that matter) cry their eyes out.
posted by conrad 1 comment: