OK, I use the word "friend" very loosely here. To be totally honest, the people in the pictures don't even know who I am! :)
I was just happy to have met them and exchange a few words with them. 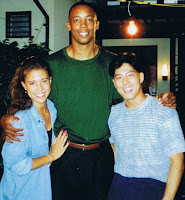 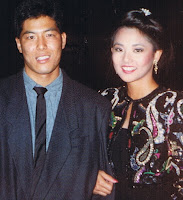 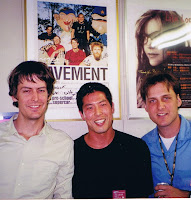 I can claim Stephen and Scott as my friends. In fact, we used to be best friends back in elementary school and were all part of the ol' Morada gang. The picture of the 3 of us was taken backstage when I saw them live at Blitz Akasaka. You can also see them in a couple of the Halloween pictures on my October post. I did also have dinner with Sean Elliot that summer night we took that picture. This was back when I lived in Matsuyama in 1990. He was dating a friend (half-Japanese girl in picture) whose mother was from there.

Since I'm on the topic of famous people I've met, I have to tell the story of when I was a bellman in my hometown around 1984. Nicolas Cage was filming a movie and staying at the hotel I worked at. I was working in the giftshop when he popped in to buy some snacks. He took out a huge wad of cash and for some reason just handed a $20 bill to a little boy who happened to be standing next to him. He just said "here you go". It was so spontaneous and so surreal. Speaking of movie stars, I was also on the set with Michael Caine and Sally Field as an extra. My friend, Jeff, and I were just a few feet from them during the scene we were in. We were so excited and went to the movie as soon as it opened. We watched the whole film anxiously waiting for our scene to appear only to find out that they cut out the entire scene. Anyway, that was the end of my acting career, haha! :)

I'll finish by writing about my famous cousin, Philip Kan Gotanda. He's one of the most well-respected Asian-American playwrights and a very cool guy too. My favorite play of his is "Sisters Matsumoto" which was based on my grandmother and her sisters and their lives after returning from the internment camps. I had the pleasure of seeing it both in San Jose, California and in Tokyo (in Japanese).